tl;dr: Vulnerability in VK bookmarks allowed attackers to get direct links to images from messages, private albums of users/communities. I wrote an exploit that bruteforces photos ids uploaded for a certain period and then using this vulnerability I could get direct links to images. In short: I could get all yours yesterday’s photos in 1 minute, in 7 minutes - all photos that were uploaded last week, 20 minutes - last month, 2 hours - all for last year. This bug was fixed and VK offered me 10k votes (it’s an internal virtual currency, approx. $700)

Main purpose of bookmarks in VK is to store liked stuff, but there is an ability to manually add an internal link to something in the site. The last one sounds interesting, isnt it? I added link to a photo and then I saw preview of an image and text with a type of added object:

Some logic on server parses link, tries to recognize model and then fetches information about object from database. When developers write such complex methods, it’s very easy to make some mistake. So I could not pass by this:)

After a few minutes of experiments, I found small information leakage issues. When I added link to photo or video that I could not access, I saw a small preview image. Also I could see private notes’ titles. Using fave.getLinks method in API I also could get thumbnails (75px and 130px). So nothing serious.

I decided to go to mobile version of site to make sure everything displayed there as in normal version. And when I looked into the page code I saw this: 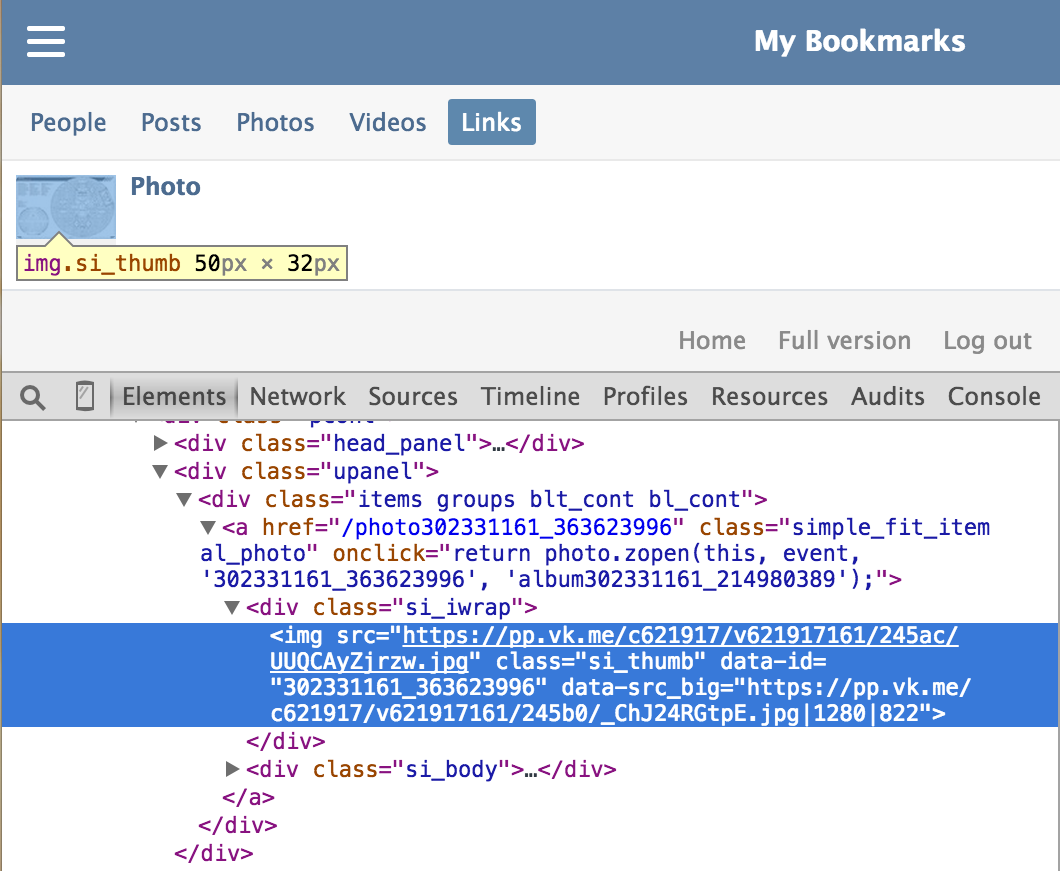 Thus, I was able to get a direct link to any image in VK, regardless of where it was uploaded and it’s privacy settings. It could be an image from personal messages or photo from private albums of any user/community or generated by some app and etc.

Seems I could finish research on that and write to VK developers about this issue, but I was wondering is it possible to get all (or at least uploaded in a given period of time) user’s photos and then get direct links to them using this vulnerability. But, the main problem here is that I don’t know photos links (photoXXXXXX_XXXXXXX) that I should add to bookmarks. First I thought about bruteforcing this links, but immediately rejected this crazy idea. I hoped I could find some place where all this photos ids leaks, I checked every method related to photos/albums and etc, but with no success. I wanted to give up, but looked again at the photo link and suddenly realized that the bruteforcing was a good idea!

Alas, but after two hours of experiments, I did not understand it =/ On HighLoad++ 2012 Oleg Illarionov said a few words how they store pictures, about horizontal sharding and how they choose an upload server, but nothing that could help me understand how the second part is being generated. Seems like there is some global counter for that, but not so simple… Because if the second part was formed by a conventional auto_increment, then ids values were already have reached enormous values (e.g. in facebook this value ~700T at this moment), but in VK this value only ~400M (although, according to statistics every day users upload upto 30M photos). So, it’s clear that this value is not unique and not random. I wrote a small script that moved through “old” users photos and looked into their ids, finally I got a chart that displays how the second part value changes per year:

Values leaps according to some factors (number of servers or new logic maybe?). But the point is that they are small enough (especially in the last 2-3 years) and very easy to calculate the range of id for the desired period of time. So, for example, to find direct links to user’s images for last year just need to go through and add to bookmarks only 30M (from _320000000 to _350000000) variations of links! Below I described the bruteforce technique that allowed me to do this in a few minutes.

I could try to add links manually via interface or write simple script that adds one link per request, but it would be boring and too long. In this case bruteforce’s speed would have been only 3 bookmarks/sec, because there can be maximum 3 requests to API methods per second.

In an attempt to bypass this limitation, I decided to use execute method. In one call of this method can be upto 25 requests to API.

Thus, bruteforce speed increased to 3*25 bookmarks/sec. Would have to spend a lot of time to fetch photos uploaded for a last year, but for shorter period this method already could provide photos for a reasonable time.

Requests/seconds restriction acts on each application separately, not a whole user! So there is nothing to prevent me from send multiple parallel requests using tokens from different applications.

First, I needed to find (or create) required apps count. I wrote the script that searches standalone apps in defined range.

Ok, apps have been found, now I had to grant permissions to them and get tokens. To do that I used Implicit Flow client authorization mechanism. I parsed authorization dialog’s html, fetched authorization url and then got token from redirect url. This class requires such cookies: p,l (login.vk.com) and remixsid (vk.com):

The number of concurrent requests is equal to tokens count. I find typhoeus gem being the best solution for performing multiple HTTP requests in parallel. So, I got such bruteforcer:

When it finished work, in bookmarks there were all victim’s photos uploaded in the certain period. After that I could simply go to VK mobile, open browser console, fetch all links from data attributes and enjoy beholding photos:)

It all depends on internet connection, VK server latency, CPU speed and many other outside factors. I ran the script above against my VK account and got such numbers (without time that spent to getting tokens):

It’s an average time that I got during testing photos ids bruteforcer for a specific period. I’m pretty sure, all this stuff could be speeded up. For example, photos bruteforcer could use a single queue of requests with normal sync logic between each others to get rid of situations when the whole process is stuck because of one timeout request. Or attackers just could buy a couple of EC2 instances and got all photos of desired user in a hour.